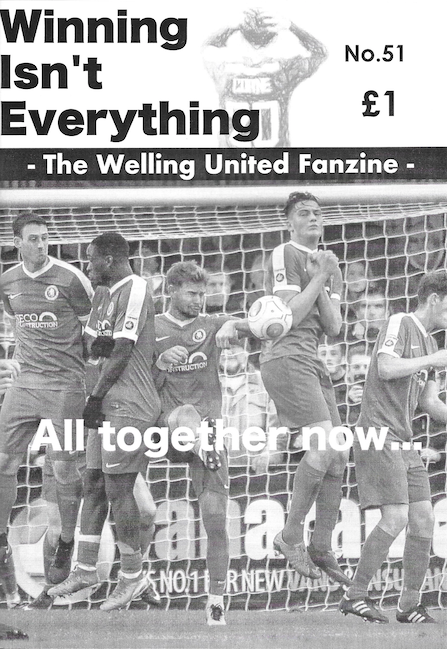 As promised yesterday, we bring you an article from WIE 51 published in March 2018. We hope you have a good Easter and, more importantly, stay home and stay safe.

I see that poor Tottenham had a bit of a whinge about the state of Rochdale’s pitch before their recent FA Cup tie.  Apparently, in a town where it rains more than one day in two, the pitch can get a bit heavy.  Well, there’s a shock. How can today’s highly paid professionals be expected to play on such surfaces? The delicate flowers.

Being of a certain age, I feel that warm glow of nostalgia for proper muddy pitches. A quick diversion into the joys of YouTube reveal that even such a non-physical player as Trevor Brooking couldn’t avoid getting mud on his shirt from time to time while ghosting around in midfield in the 70s.  My somewhat selective memory has all pitches in the 70s consisting entirely of mud from about October, with the sole exception being my primary school field, where a cat’s sneeze in the wrong direction at lunchtime would be enough to have the pitch deemed “too wet to play” in the afternoon.  What could have been an enjoyable attempt by a ruck of small boys to get a leather ball (with laces) airborne was thus frequently cancelled.  The grass remained pristine, and the PE teacher had to inflict his sadism on us indoors.  So all those handy 1970s coaching hints of “using the wings” to avoid the quagmire that ran down the middle of all pitches were never put into operation at our school.  Of course, using the wings was not really an option anyway, as the dangerous psychopaths would be stationed at left and right back to inflict that other piece of coaching advice from the 70s “tackle them really hard as soon as you can to make them lose interest”. Tricky wingers were not so tricky if they couldn’t walk. The ultimate sadism from that particular primary school teacher was when, on the very rare occasions that the grass had avoided a cat-based moisturising, he would emerge from the PE equipment storeroom carrying… a rugby ball. PE teacher being a bastard?  Surely not.

Anyway, he is probably dead now, so on we go.

The questions posed to me by the editor were “How muddy was too muddy?”, and “What was the muddiest?”  My unreliable memory tells me that when games were postponed back then it was usually because of a frozen pitch, rather than what is now routinely described as a waterlogged pitch.  So any amount of mud was OK.

Welling’s pitch used to be pretty dreadful.  We moved into PVR in 1977 after Bexley United went bust in 1976, and it is probably fair to say that Bexley hadn’t been investing too much money in the pitch before they died.  With the ground being situated at the bottom of a hill, and with no adequate drainage, the pitch would become very muddy indeed.  Forty years later, and after much hard work by the club, and even with the best efforts of the parasites from Erith, the pitch is now pretty good. But that was not the case in the early years of the Wings at PVR. 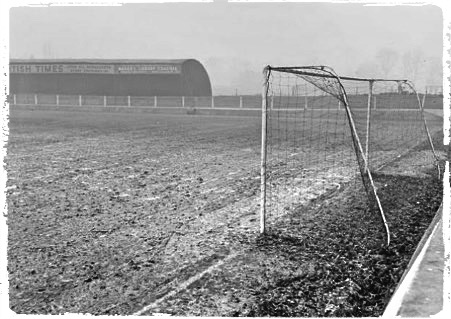 Of course, whether the centre of the pitch was a bog or not didn’t really matter too much.  We had Ray Burgess and Peter Green in the middle of the pitch, hacking away at anything that moved in the overgrown sandpit that was midfield if anyone was foolish enough to try to move the ball through that particular area.  Behind them was Nigel Ransom who could thump the ball forward over all the mud, thus successfully bypassing it, to John Bartley, who would score.  So there was not much need of grass anyway.

The muddiest game I can remember was in 1983, on Easter Saturday.  I remember it as yet another reason to hate dartford.

1982-83 was the first year of the Southern League Premier Division (SLP) after a reorganisation. There had been a Southern League Midland Division and a Southern League South Division, and the top halves of these two divisions were merged to form a division that sat one level below the Conference. The Wings had scraped into the Premier Division by finishing the season before in 8th place.     Meanwhile, dropping down to the SPL after relegation were both dartford and The-team-formerly-known-as-Gravesend, which meant that plucky little Welling would be playing in the same division as our two local rivals for the very first time.  Of course, we had never been regarded as rivals before, and the fact that they had to stoop to play us was a bit embarrassing for our North West Kent neighbours.  Or Giants, as they regarded themselves.

We had been expected to struggle.  After all, the year before had been our first in the Southern League, and so we had effectively achieved two promotions in two years.  But with a midfield that contained Andy Townsend, and with Tony Agana on the left wing, we had players who would go on to have long careers in professional football and come Easter we were holding an unlikely 3rd place. Above us were Kidderminster and the third team to be relegated from the Conference, AP Leamington.  We were within touching distance as the season went into the final month.  But our Easter was looking tricky.  Home and away against dartford was scheduled for the Easter weekend.

And then enter the London FA, to make things trickier.

Once upon a time the county cups were taken a lot more seriously than they are today. In the early 80s the non-league pyramid system was just a plan, rather than a reality.  The Conference (Alliance) had been set up for 1979-80, a merger of the Northern and Southern Leagues with the intention of putting forward a solitary candidate for election to the closed shop of the Football League. As it turned out, no champions of the Alliance were ever elected. The third major league, the Isthmian, wasn’t interested in joining the pyramid structure.  Isthmian clubs had traditionally been amateur, whereas the Southern and Northern Leagues were dirty professionals, and although amateur status had been abolished in 1974, the amateur ethos was still strong in the Isthmian League.  They weren’t interested in going up to the Football League.

With little promotion within or between leagues, those clubs not in a championship race would focus more on cup competitions as a source of glory.  Hence the County Cups had a higher status and wouldn’t be used as an added training session for the youth team and a way to use up suspensions.

The London Senior Cup had a high status due to the large number of Isthmian Premier League teams in the competition.  Winners were Enfield, Dagenham and Walthamstow Avenue – big names in those days- and the competition was even mentioned in the Daily Telegraph, the only paper that covered non-league football in those days.  Covered it selectively, of course.  There was a column covering the old amateur teams in the Isthmian League but not the distasteful pros of the Southern and Northern Leagues, and another covering the Public School Old Boys Arthurian League, where readers could keep abreast of the fortunes of the Old Falopians and Great Pubes OBs.  Indeed, Welling’s first mention in the national press was in the Daily Telegraph a couple of years previously when the writer correctly predicted that “Carshalton should prove too strong for Athenian League Welling” (they were, to the tune of 4-0) in a London Senior Cup preview.

In 82-83 Welling went on an unexpected cup run in the London Senior Cup.  Victories against Fisher, Wembley, Kingsbury, Bishop’s Stortford and Leyton-Wingate had found us in the semi-final, where we were drawn at home for a first ever meeting with Sutton United and their exciting chocolate shorts. But there was a problem.  The Blazers of the London FA were absolutely convinced that their competition was very, very important (after all, Arsenal did win it in 1891) and insisted that their semi-final be played on a Saturday.  They chose Easter Saturday.  That left us a schedule of an away game at dartford on Good Friday, a cup semi-final the following day, followed by the return game against dartford on Easter Monday.  Three games in 4 days, which would decide our season.

Appeals to the London FA fell on the already deaf ears.  Sutton were delighted – they had no game on Good Friday and had no desire to ask for another date (that amateur spirit of “fairness” shining through, there).

So, to Good Friday.  Our first ever meeting with dartford as equals.  And our first defeat.  I have no specific memory of the game – I try to forget days out at Watling Street.  They all merge into one grim episode, epitomised by a red card for Stuart White for his unfortunate kick to the testicles of a dartford full-back, and his subsequent march off without waiting for the referee’s guidance.

Meanwhile, back at PVR, the already muddy pitch was being lovingly prepared for the Cup semi-final by the reserve teams of us and, again, Dartford, in a Kent League division 2.  The game was played in torrential rain, finished 2-2, and left the pitch a ploughed field.

We lost the Cup semi-final, of course.  It was 2-1 in the end, and not surprisingly we ran out of steam and couldn’t find an equaliser.  The pitch was ridiculous, and a visiting Sutton official was reduced to laughter when the man on the tannoy warned spectators not to come on to the playing field at the end of the game in case they damaged the pitch.  In case they drowned might have been a better warning.

Come Monday, and against my earlier assertion that games were never called off other than for frozen pitches, the return game was indeed cancelled.  Which was fortunate as the team needed the rest.  The game was played a week later, and we won 2-0, which was joyous.

It wasn’t enough, though.  A Tuesday night defeat away at eventual champions Leamington ended our hopes of an unlikely championship, and we finished 10 points adrift in 3rd place.  Leamington fell foul of the new curse of non-league football, ground-grading, and despite being in the Conference just the year before were denied promotion, with Kidderminster taking their place. Big boys dartford and The-team-formerly-known-as-Gravesend finished below little Welling for the first time, making us Kings of North West Kent for the first time, and we also went off to lose the final of the Eastern Floodlight Trophy (another cup competition we had been taking seriously) against lovely Chelmsford.  The less than sporting Sutton United went on to win the London Senior Cup, beating the yet to be hated Woking in the final.

Thirty-five years on, and games like the Sutton semi-final just wouldn’t be played.  Perhaps that’s a good thing, but I must confess to being utterly delighted this winter while watching a game that was being played on snow, with the lesser seen orange ball.  It was amusingly farcical. The undoubted highlight was the award of a penalty, and the subsequent search for the penalty spot.  Shades of the Baseball Ground of Derby in the 70s where the penalty spot was painted in by the groundsman before Derby could take a penalty against Man City, while commentator John Motson had kittens in the background.

Kittens at a football ground.  Never a good idea at my primary school.  They could get your football games lesson cancelled if they sneezed. The little bastards.