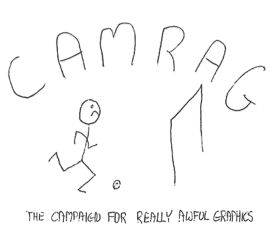 Our Campaign for Really Awful Graphics continues unabated. This time we bring you three more examples, which were found recently while trawling through the depths of eBay (don’t ask). The first, on the left, featured on the cover of Ardley United’s programme in 1998/99. So it could be considered as fairly modern and rather disturbing. We *think* it depicts a player attempting a back flick that would only end in tears at the level Ardley were playing, especially trying it with that odd shaped ball. Unfortunately we don’t have a date for the middle image, which comes from a Wotton Rovers programme. It’s a bit of an odd pose for the competing players and reminds us a little of Torvill and Dean’s Boléro. Or something. And finally, on the right, we have the graphic from Telford United’s programme in 1973/74. Good catch, massive right hand, great moustache. What more could you want? CAMRAG, it just keeps on giving.